The nuts that were found in the ocean and on the beaches no longer had a husk, and resembled the dismembered lower part of a woman’s body, including the buttocks. This association is reflected in one of the plant’s archaic botanical names, Lodoicea callipyge Comm. ex J. St.-Hil., in which callipyge is from the Greek words meaning “beautiful rump”. Historically these floating “beautiful rumps” were collected and sold for a fortune in Arabia and in Europe. 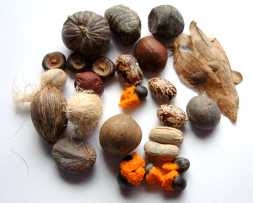 In the Maldives, any Coco de Mer nuts that were found in the ocean or on the beaches were supposed to be given to the king, and keeping a nut for yourself or selling it could have resulted in the death penalty.[2] However, Rudolf II, Holy Roman Emperor was able to purchase one of these nuts for 4,000 gold florins. The Dutch Admiral Wolfert Hermanssen also received a nut as a gift for his services, from the Sultan of Bantam in 1602, for fighting the Portuguese and protecting the capital of Bantam. However, the nut that the admiral was given was missing the top part; apparently the Sultan had ordered the top of the nut to be cut off, in order not to upset the noble admiral’s modesty.[3][4] João de Barros believed that Coco de Mer possessed amazing healing powers, superior even to those of “the precious stone Bezoar”.[4] In one of his books, Dr. Berthold Carl Seemann mentioned that many believed the nuts to be an antidote to all poisons.[2] The nuts were praised not only by scientists and botanists, but also by poets. Luís de Camões wrote